Most of people have heard about Le Corbusier, he is usually associated with white modern buildings like the ones below: 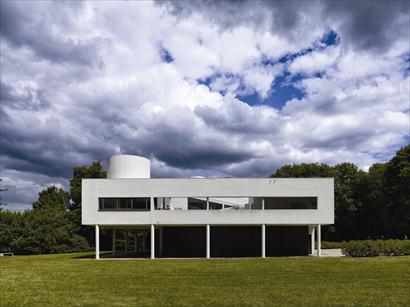 In his book Anthony Flint tries to present Le Corbusier through his work and to do justice to his ideas. He presents Le Corbusier as a visionary and a rebel, a man with holistic vision of how new cities should look like, a man that will use every single opportunity to make it happen, often ignoring the cost. Flint is not trying to justify Le Corbusier’s mistakes, he is not trying to deny them, his goal is an objective account of the life and career of one of the greatest architects of the XX century, but also a man not free from flaws. Flint takes us through his most important projects, adding some of the personal life context, but never becoming purely anecdotal, there is no doubt that this is a book about an architect, first and foremost. He talks about Le Corbusier’s ideas in light of his actual projects allowing us to easily relate theory to practice. Throughout the main ten chapters Flint refrains from any judgement of Le Corbu’s ideas, he merely presents them on their own. Then once the reader gets good understanding of what drove Le Corbusier, Flint in his epilogue adds the context of everything that happened in architecture and city planning since then: the spreading of modernist ideas and then their violent rejection as completely unfit for the way people and societies function. Flint acknowledges that Corbu may have been wrong, but also asks to what extent can he be held accountable for what happened after him, for how partially his ideas were implemented. He leaves that for us to judge and discuss further.

One interesting thing that this book and google made me realize is that Le Corbusier actually loved colors, he was not as obsessed with white, as it may initially seem:

If you’d like to experience Le Corbusier’s architecture first hand you can even stay in Unite d’Habitation in Marseille, just check at Airbnb.